An old story about Gizmo hiking the 4000 footers of NH

Posted on September 9, 2016 by gizmogoeswest 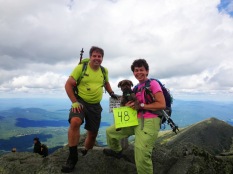 Mt Monroe with Mt. Washington in the background

Gizmo came to live with us in 2010. My mom had just gone into a nursing home and a friend thought he might be good company for my dad. My dad was not able to manage him but didn’t want us to give him up. We were not looking for a dog. We spend almost every weekend hiking and camping. I looked on the internet for other Shih Tzus that hiked and what I found was they are known for being lap dogs. My husband and I were nervous that he might not be able to hike with us. We decided to give it a try. The first weekend we had him we took him to Mount Osceola. I am pretty sure that he had never been hiking before. He had lived with an elderly couple for the first 3 1/2 years of his life. They were devastated when they had to bring him to the shelter when they moved into assisted living. He was wide eyed for the first couple miles of the trail, avoiding mud and water. Near the top of Osceola he met a golden retriever named Riley. This is when everything changed. He became very excited about hiking, particularly down. I could barely keep up with him as he made his way down the mountain. My husband and I decided this might work and decided to pursue a complete second round of the 4000 footers, this time with a Shih Tzu. Gizmo has had a blast hiking these mountains and despite his small size (15.7 pounds and 6 inch legs) has done a phenomenal job. Everyone chuckles when they meet him on the trail and of course ask how much he needs to be carried. We say, “none”. In fact his small size is sometimes helpful, like coming down from Bondcliff towards Lincoln woods. We simply “repel” him with his leash and harness down extremely steep areas like this. He has absolutely “no fear”. I am pretty sure he would have been a rock climber if he were a human. I was very concerned about how he would do on the Presidentials but he was a trooper. He finished his 4000 footers on Mt Adams after just completing Jefferson via the Caps Ridge trail. He loved all the scrambling that day and enjoyed a Stella & Chewy’s reward at the top. We both think he has summit fever, he gets very charged up when he thinks he’s near the summit. The hike down Valley Way after completing Adams was a very quick one. We nearly ran down the trail as Gizmo tried to pass everyone he had met that day. They were all amazed at how much energy he had after that long tough hike. This second round of the 4000 footers were very memorable for us as we hiked with a very special Shih Tzu named Gizmo.

I just "pre-tired" from my job of over 30 years as a nurse. John, my husband and Gizmo and Sierra our Shih Tzus are embarking on our 3rd cross country RV adventure. We are searching for awesome dog friendly hikes and adventures
View all posts by gizmogoeswest →
This entry was posted in Dog Friendly, hiking and tagged four thousand footer club, Mount Madison, Mount Monroe, Mount Washington, New Hampshire, Osceola. Bookmark the permalink.